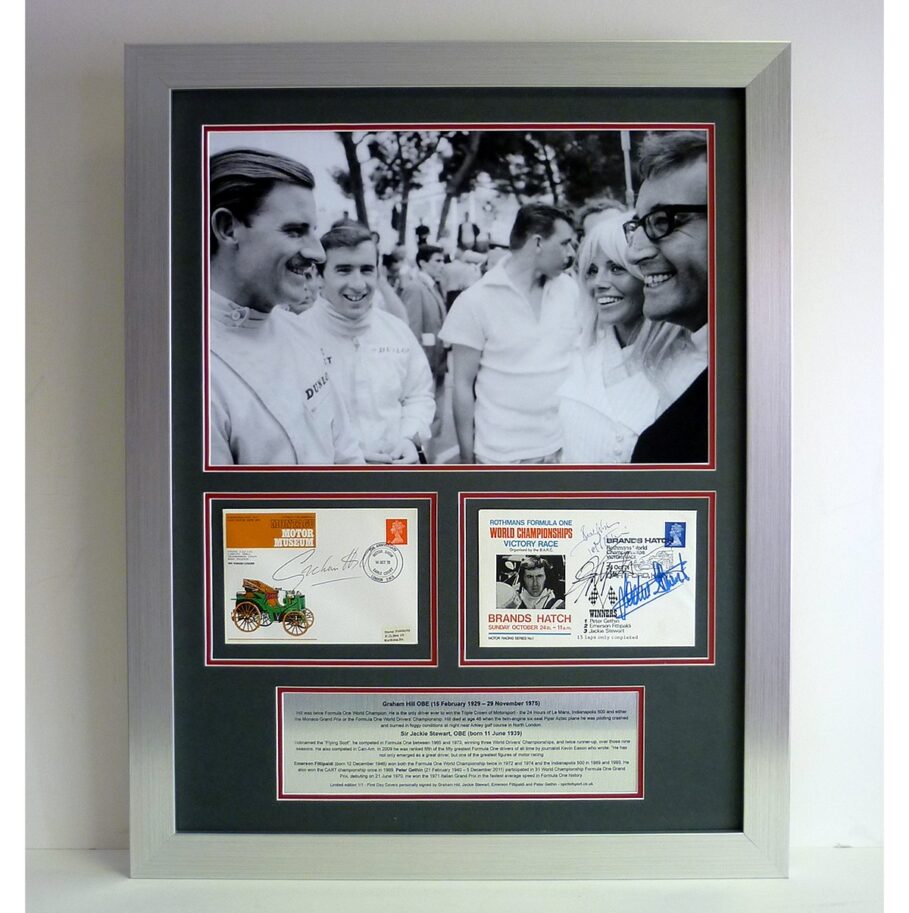 This superb one-off item of Signed Formula One Memorabilia contains two First Day of Issue Covers that are signed by Graham Hill on the left and by Sir Jackie Stewart, Emerson Fittipaldi and Peter Gethin on the right.

Above this is a large and interesting press photo of Hill and Stewart chatting to Peter Sellers and Brit Ekland.

The plaque reads as follows:- Graham Hill OBE (15 February 1929 – 29 November 1975) – Hill was twice Formula One World Champion. He is the only driver ever to win the Triple Crown of Motorsport – the 24 Hours of Le Mans, Indianapolis 500 and either the Monaco Grand Prix or the Formula One World Drivers’ Championship. Hill died at age 46 when the twin-engine six-seat Piper Aztec plane he was piloting crashed and burned in foggy conditions at night near Arkley golf course in North London. – Sir Jackie Stewart, OBE (born 11 June 1939) – Nicknamed the “Flying Scot”, he competed in Formula One between 1965 and 1973, winning three World Drivers’ Championships, and twice runner-up, over those nine seasons. He also competed in Can-Am. In 2009 he was ranked fifth of the fifty greatest Formula One drivers of all time by journalist Kevin Eason who wrote: “He has not only emerged as a great driver, but one of the greatest figures of motor racing Emerson Fittipaldi (born 12 December 1946) won both the Formula One World Championship twice in 1972 and 1974 and the Indianapolis 500 in 1989 and 1993. He also won the CART championship once in 1989. Peter Gethin (21 February 1940 – 5 December 2011) participated in 31 World Championship Formula One Grand Prix, debuting on 21 June 1970. He won the 1971 Italian Grand Prix in the fastest average speed in Formula One history.

Limited edition 1/1 – First Day Covers personally signed by Graham Hill, Jackie Stewart, Emerson Fittipaldi and Peter Gethin It has recently been framed in our Berkshire studios in a tasteful silver surround with dual mounts measuring in at a large and impressive 71cm by 57cm (21” by 22”).

A wonderful item of Signed Motorsport Memorabilia. It has been fully authenticated by an industry expert and supplied with a certificate of authenticity. 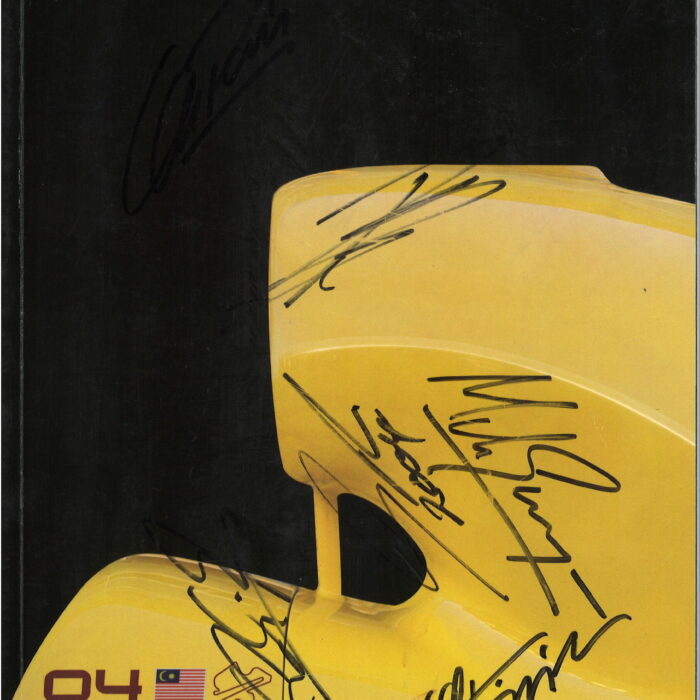 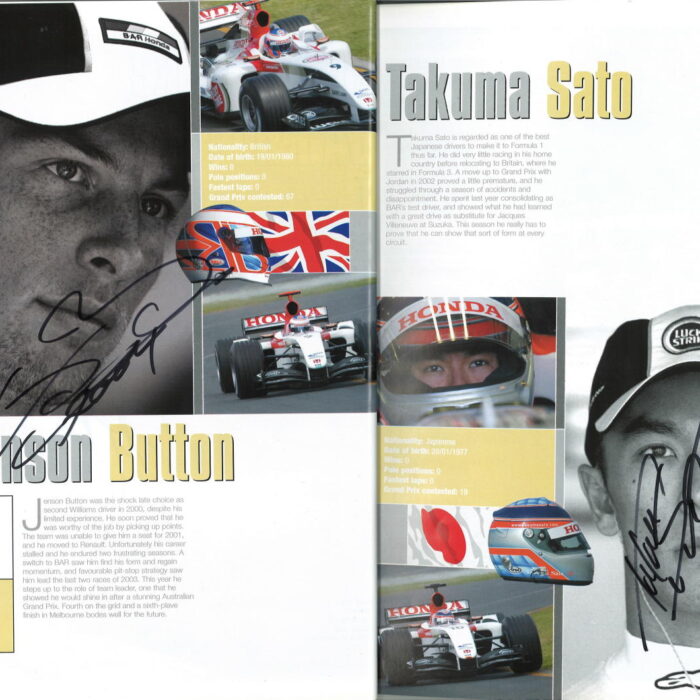 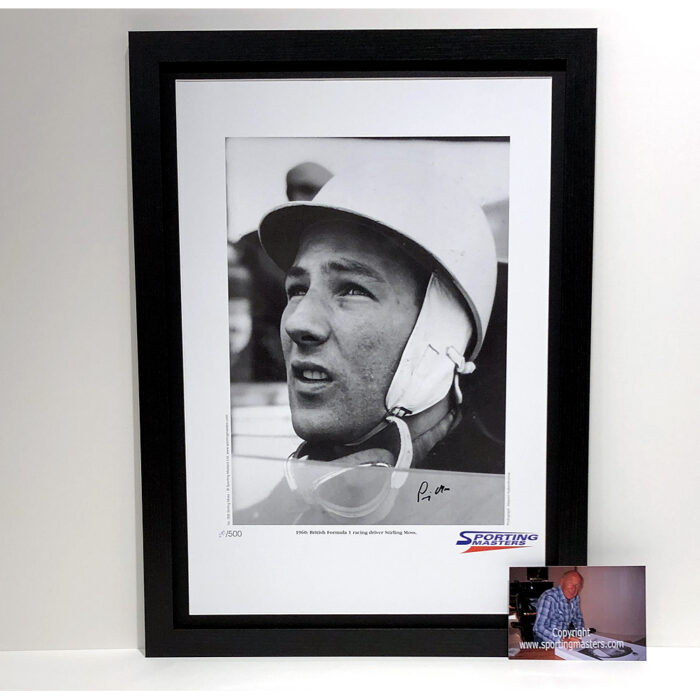 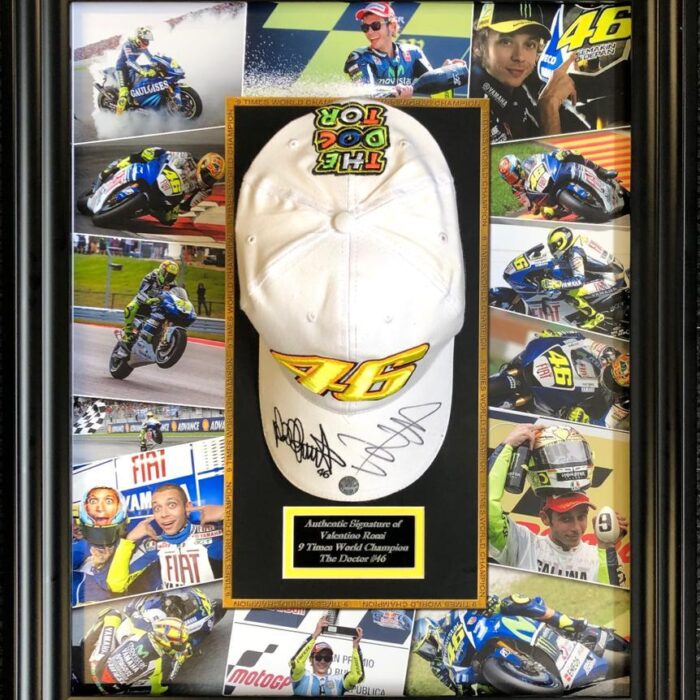 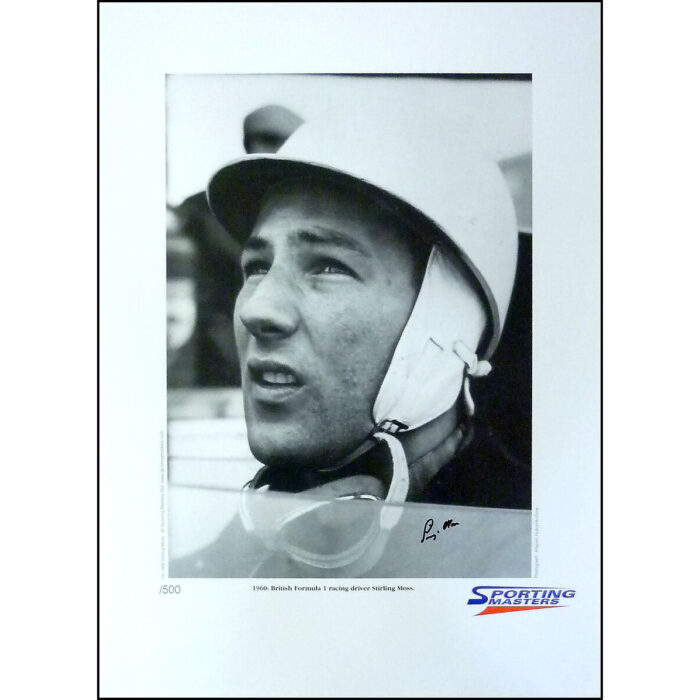